I need to chronicle this so it can be proven later .

About 6 months ago during the remodel of my parents house we made a neat discovery . With the removal of the wall+sheetrock and the heater core insert in the wall my mom and I found something rather odd . It was a little metal plate with Lockheed on it , obviously something from an aircraft. 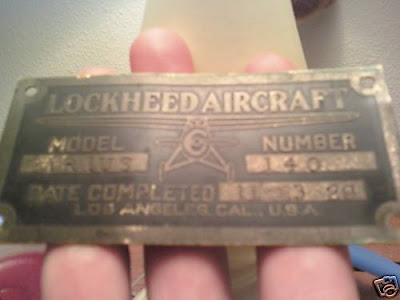 It was interesting and old , dating back to 1929 . I took it home and it had been on my floor or in my desk for quite some time (just floating around my room) . As I'm preparing to move to NZ I started selling everything I own on Ebay/ craigslist . This item was no different . I don't hoard things and thought "what the heck , lets find out what its worth on ebay" . I listed it for $75 with no takers until the final hour of the auction . It sold for $255.10 ..... I was really excited needless to say.

After talking with the buyer he started asking me really interesting questions about it . At this point I had not told him about the indicipherable description on the back of it - something that said "Col Lindsay ... .... ..... 1931 China" . I thought nothing about it.

I shipped the plate yesterday as payment was received through pay-pal . This morning the Smithsonian contacted me .... my heart stopped for a second . This is the email that followed:

Dear Mr. Piper,I am a curator at the National Air and Space Museum in Washington, D.C. We were made aware of your eBay auction and noticed that the data plate is actually for the museum's Lockheed Sirius aircraft. We are interested in reclaiming the data plate. Would you be willing to discuss this with us and place us in contact with the buyer? I am sure that we could come to an agreement that would be to the satisfaction of all parties. Please call me or contact me at my work e-mail if you would like more information.Thank you, Dr. Jeremy R. KinneyCurator, Aeronautics DivisionNational Air and Space MuseumSmithsonian InstitutionP.O. Box 37012NASM, RM 3304, MRC 312Washington, D.C. 20013-7012Telephone: (202) 633-2640FAX: (202) 786-2447E-mail: (kinneyj@si.edu)

I called the number then hung up when in fact I had called Jeremy Kinney's office (hung up from shock , sorry!)

It wasn't a scam . I started researching the plate feverishly . What I found blew my pants off .

The first and best known Sirius was bought by Lindbergh, and in 1931 was retrofitted to be a sea plane. He and his wife, Anne, would fly it to the Far East, and she would write a book about their experiences there entitled North to the Orient. The aircraft was damaged in Hankou, China when it accidentally capsized while being lowered off the HMS Hermes, and had to be sent back to Lockheed to be repaired.
In 1933, the Lindberghs set out again with the plane, now upgraded with a more powerful engine, a new directional gyro, and an artificial horizon. This time their route would take them across the northern Atlantic, with no particular destination, but primarily to scout for potential new airline routes. While at a refueling stop in Angmagssalik, Greenland, the Inuit of the area gave the plane a nickname, "Tingmissartoq" or "one who flies like a bird". They continued on their flight and travelled to many stops in Europe, Russia, then south to Africa, back across the southern Atlantic to Brazil and appeared back over the skies of New York City at the end of 1933, after 30,000 miles and 21 countries, where droves of people turned out to greet them as they landed.
The aircraft was in the American Museum of Natural History in New York City until 1955, when ownership of it was transferred to the National Museum of the United States Air Force in Dayton, Ohio. It was given to the Smithsonian Institution in 1959, and it went on display at the National Air and Space Museum when the original facility opened on the National Mall in 1976.

What I had found behind the wall at my parents house and sold on ebay for $255.10 was a priceless treasure . The plane was flown by none other than Charles Lindbergh !!!! Does this make me Indianna Jones or something?

A whole range of emotions stirred in my head , but one that stuck was "I know Kinney doesn't know who I sold it to on ebay and he wants it- so if I play this like a chess game maybe I could get money out of him!" How could I work the angles etc .... Then another thought came into my head : "Son I have always taken care of you , trust me" . After calling Vern Frykholm and telling him what happened (I always call Vern when I'm in a pickle) , I emailed the buyer and gave him all the info for the Smithsonian and how I didn't want to tell him but it was the right thing to do . I also included in the letter that if he was given a large sum of money to remember me (as Im trying to save $$$$ for Bible School) but It is his and I don't expect anything from him . I knew it was the right thing to do instead of playing games .

So this is where Im at now . I emailed the Smithsonian and shared about what happened and told them that I forwarded the info to the buyer without revealing his name . Pretty wild! I still can't imagine how something like that ended up in an old house in Sequim! A part that I really like is that I shipped the Data Plate inside of an orange Gideon Bible wrapped in plastic because it was the strongest and most secure way to mail it (inside of a bubble wrap package of course!) . Lets see what happens now . I feel a strange sense of calm about it . Ive given my desires/greed/emotions over to God . He has always taken care of me , and me worrying about "trying to get money for college" out of this is no way to be . I trust Him , everything will work out . I can't help but imagine how this all happened though , I guess only time will tell . I will keep this updated as the event unfolds over the next few days .
Posted by Piper at 12:09 AM 2 comments: