Click Here to Donate to the Mike Piper Memorial Build

Today, I received word that I was elected by a group of my peers to student leadership in the 2011 Laidlaw school year. I'm tremendously humbled by this opportunity to serve the student body and my heart is for growing this community of believers. The first thing I did was get on my knees and ask the Lord to consume my heart and ask for his guidance. Thank you to all that have been praying for me faithfully.

The role will entail working with and supporting the men and womens student presidents as we work with faculty and staff to bring more of Christ's likeness into our community of faith. The schools principle (Dr. Rod Thompson, a phenomenal man with a incredible vision) will be directly over-seeing the student leaders and mentoring this group. My understanding as of right now is that I will be partnered with a professor that will be the person I'm accountable to. This next year will be a tremendous time of being stretched and grown and I'm incredibly excited to journey with my peers through the joys and struggles that life brings. My specific role within the 10 leader body will be tailored to suit my skill set and passions and will most likely entail pastoral care+ community activities.

Thank you for all the support and for journeying with me over the course of my life. I believe being a leader is in being a servant. When Jesus talked about the "least of these," he was talking about the disciples so I must lower my self importance (which is different than lowering your self-worth) and serve my heart out. My focus is on Christ alone (where else should I go?) and I feel the weeks+ leading up to this day have prepared me to be a more focused and intentional servant. To God be all the glory-


-Please pray for my sermon prep and delivery on the 7th of November at Avondale Baptist Church as well as the road leading to service in Fiji next year with ABC's junior highers. Also for finances.
Posted by Piper at 10:38 PM No comments: 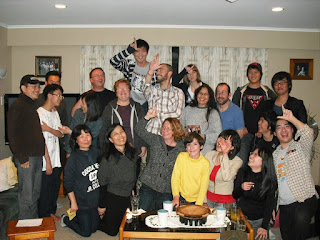 Above: International students dinner party.
Prayer requests:
My friend Sean Saffold is going hard for Christ serving in Myamar/Burma and has become very sick. I have very little details other than the email I received from his mother﻿ today.
Tiffany Manning who is serving in PNG is getting over her sickness, but both her Grandma/Grandpa in the states were in a car accident and need your prayer now for their collective surgeries. They are stable.
Myself Promise Keepers weekend, discernment for Church issues, studies, preaching.
---------------
Getting a day up at the mountain was quite enjoyable, it was nothing like Mt.Baker but the view from the top was stunning! Spear fishing didn't happen, I'm currently up to my ears in assignments, thank you for your continued support.
-Piper
Posted by Piper at 7:12 PM No comments:

Just a brief update on life. Last Sunday I preached at Carbon Cluster, a group of South African university aged students on "Radical Jesus" (Mark 2:13-17) and it was well received. God did some sweet stuff on my heart during that time for which I'm grateful. Thank you to all who prayed for me, I preach again at Laidlaw (for a grade) on Wednesday the 13th, then on November 7th at Avondale Baptist. These are sweet times for me as I love the study/crafting/delivering of Gods word. I want to thank Phil Koistra at IBC in Port Angeles for first teaching my about the process of crafting a sermon and introducing me to Baptist preacher Matt Chandler who outside of my parents/mentors has had the biggest influence on my walk with Christ.

I'm currently half way through a 2 week break. I was able to take 2 days off to due a couple decent cycling trips, bush runs (running through the hilly jungle) and train at my boxing gym. They say, "the man that works with his head wrests with his hands," and that is an understatement. I love the times of refreshment out in creation. Thursday and Friday though, I was back home in the library, where I will spend the majority of my next week. I have two notable projects due in the next month that are worth 45% each in their respective classes, as well as other minor ones. It's all out, full on, from now until the end of year one at School. I have been here in NZ now for 9 months and it only feels like a few days.

I start guitar lessons tomorrow, go snowboarding Tuesday (for the first time in nearly 1.5 years!), and then on Friday head to the 2 day Promise Keeper conference in Auckland. Within this week I might be spearfishing/snorkeling off of Goat Island (what a name!) mixed in with 35+ hours in the library.