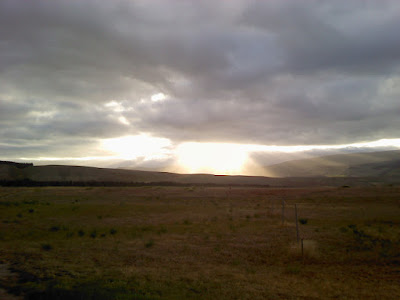 Above:  6:52 am this morning, the sun breaks out from behind the clouds at Zebra Vineyard.

I love the holidays. These are times when the days get longer and hotter; quality time is spent with friends and family around the barbecue... that is, unless you are in the northern hemisphere where the complete opposite is true and most people are beginning to look more and more like the vampires found in Forks, deprived of life giving vitamin D. A notable person in particular has decided to trade the northern hemispheres snow for  southern sun- 9am this Thursday my sister lands at the Queenstown airport. Merry Christmas, to me!

Last weekend I was asked by my South Island hosts, the Pendreighs if I was keen to have a 20 something cyclist from Germany stay in the backyard guesthouse with me later that day. I was totally into it. I even cleaned my room. I met Rob and I instantly liked the guy. Easy to get along with and a very conversational traveler like myself- adhering to the same minimalist traveling/life tenets as mine, such as packing lite and only owning things you really need. He noticed my devotional book by (German martyr) Dietrich Boenhoeffer  that Wayne Yammamoto gave me upon my return to the states for surgery (nice one Wayne) and was impressed. Rob considered himself on a journey with God, but knew nothing of Jesus which became the main point of discussion for the next two days. He questioned me on my journey which allowed me to share my testimony and so much more. Some of the questions he asked me clicked in with some of the recent theological studying I had been doing and a few of my answers I gave back to him solidified some things in my faith that really encouraged me. During these summer breaks I find that some of my deepest times of wrestling with God come when things are quietest in my life and the pastoral care I exert is at a minimal point being away from Church and School. It was during a time like this that Christ met me yet again, through a unlikely source- a fellow traveler. Struggles remain, but the foundation in Christ is solid. I would imagine I'm not alone but there are times in life when you get so focused on a tree, or even a leaf, that you forget about the rest of the forest. Rob attended church with me the next day. In continuity with his ethos, he wasn't traveling with any dress shirts, and it just so happened that I had bought a nice shirt on Trademe so I let him borrow that for the service. I ended up giving it to him as it wasn't quite my style/size. More importantly though, I was able to give him a Gideon Bible, signing the the "From," section with a "David Piper." He was very thankful for both, one helping him in the short term- the other in the long, God willing. 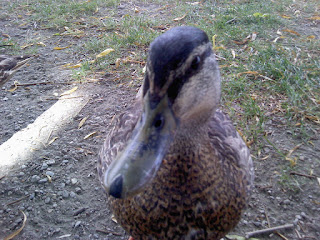 Above: An exceedingly friendly Queenstown duck that didn't understand the, "excuse me I just met you, this is my personal bubble," spacial rules. It's like that person with bad breath that wants to tell you a secret.
I bid (German) Rob farewell Sunday after church as I was leaving to Queenstown to yet again, pick up another item of bargain priced clothing. He was soooo close to accepting Christ so I continued praying for him even while journeying. I haven't heard anything more from Rob since, other than that he is now staying with other Christians connected to the Pendreighs in other Kiwi towns around the country. He is in good hands.
If you remember back to a previous post, I met a guy that heard I was a youth minister up in Auckland while some kids were trying to get me to buy booze for them... well, I went to their church last Sunday. I have now found my "Upperroom" type Church in NZ. Highly missional, for people who don't normally like/attend church mixed with those that do. Worshipped my guts out, hands held high and heard a gripping yet simple message about Jesus. Over and over again, Jesus, Jesus, Jesus. Before the service I met the pastor and he sat down with me to talk about the heart and vision of the church. I will most definitely be attending again. After the service a middle age guy named Peter offered to drive me all the way home to Cromwell, I turned him down, but he insisted. Start to finish, that was a good weekend. 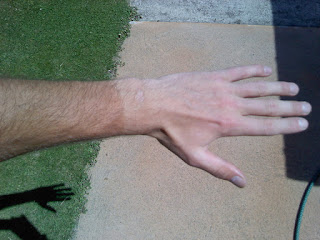 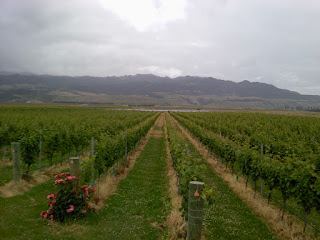 Above: Working in the freezing 60 degree rain this Wednesday. The day before was over 100, so this was a massive shock to the system.
I just completed a 6 day work week and I'm a shade above completely exhausted. After this blog, it's bedtime. Wednesday was a notable half day of work. The boss decided to move the company Christmas party to that day (out of nowhere) because the driving rain forced us out of the vineyard. At the end of the dinner party at a nice pub in Bannockburn, I was the only sober person left. One of my coworkers smashed his head on the pub van door that was going to take us home and blood was everywhere. I was able to organize medical supplies out of the pubs first aid kit to be johhny on the spot with my Red Cross first aid skills I learned at Firwood. The bleeding stopped and I patched him up after checking him for a concussion. You may or may not believe the stats I have heard on the amount of people that get fired for silly alcohol related behavior at company parties such as these, thankfully no one got fired.
Yesterday I met Avondale Baptists Church's new pastor (and my new boss) on Skype and I'm excited for the direction and vision he has. My prayer is that God is glorified and honored even more at our little Auckland church. Thank if you have been praying for this pastor searching process. Last summer I came back from Cromwell with no pastor, this summer I will come home with a new one. This, combined with the warm summer sun today and Laurens coming arrival on Thursday has left me feeling optimistic for the future.
His,
Piper
Posted by Piper at 12:18 AM