Light at the end of the tunnel?

I'm now in the most critical stretch of the semester, preparing for finals and researching for major essays. From previous experience, this is the time of the year where everything culminates into a channeled stream of fatigue, frustration and a possible sleepless night or two. My current point from which I'm navigating the 'end times' would reinforce past experience. Not all is heavy though, as there have been some beautiful moments in this last week alone that make reading the hundreds of pages of literature for and against homosexual hermeneutics/ethics, bearable.
Boxing, maybe not your personal definition of a beautiful moment but it sure connects with the unredeemed areas of my heart (saying this tongue in cheek). On Sunday evening I cycled home from Church, to which I saw the stadium parking filling up across from Laidlaw. During major events, Laidlaw sells parking for $5 a pop and the Laidlaw staff person facilitating the sales, Jenny Mackie (my direct supervisor as RA), alerted me that it was the big fight night the newspapers had been touting for weeks. To my surprise I found it wasn't sold out but I didn't have the kind of money required to get in. Dismayed, I went to the dinner halls only to discover that the maintenance guy at school had been trying to track me down. Some how he assisted All Black (NZ Rugby) and headline fighter Sonny Bill Williams managers friends sisters cousins?.... something or other, earlier that night and she felt obliged to provide him with two ringside tickets to the bout, which were then bequeathed me. Fast forward moments later, a friend and I were up front and center at the hottest thing going on in all of NZ that evening. 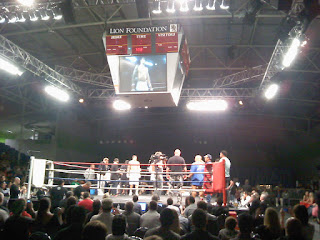 Above: Undefeated, All Black, Sonny Williams strikes a pose at the charity boxing event for ChCh
A month ago I was being pursued to do standup comedy at school by a friend, after putting it off due to projects and a somewhat apprehensive spirit as the idea of cracking jokes in front of Laidlaw peers, staff and faculty in what would be my debut standup performance was just a bit daunting- I took the plunge. The womens student president asked me if I could be ready in a week and I said yes. My friend Robbie and I began writing material last week that was critically acclaimed this Wednesday in the largest staff, student and faculty community gathering to date. It was well received and a real blast to do. I wrote good portions of the material, which my friend (who I consider funnier than myself) breathed new life into it. Dr. David Williams took this video for you to enjoy and the photos, if somewhat cloudy were provided by Ben Haliwell. 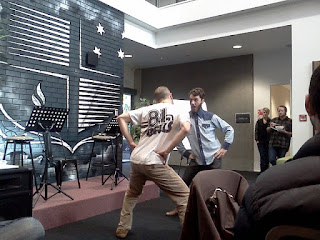 Above: "Band Wednesday" at Laidlaw. Robbie Lawton and myself getting funky to "Apache" by the Sugarhill Gang during our epic introduction. 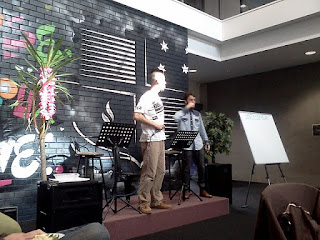 Above: Telling some jokes 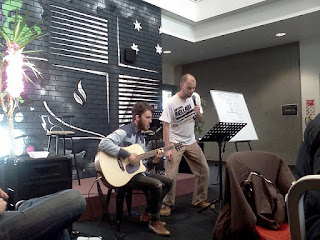 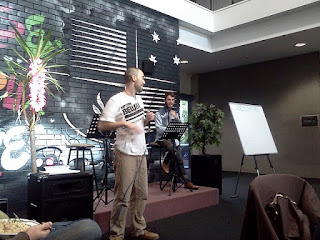 Above: Myself impersonating Arnold the govenerator.
Thursday evening before Youth Group, I was invited to Odyssey House, a 12 step program where addicts of various sorts come to live with one another in community as they attempt to free themselves of the things they know are killing them. Some members of OH attend my church, Avondale Baptist on Sundays when they are allowed to leave their campus for an hour. My OH brothers and sisters invited me to a graduation ceremony for the level 5's who graduate from the program. It was so encouraging to observe the courage of every man and woman in there, fighting to continue, going through each day in faith, not knowing what the future holds or if they will even succeed. What is beautiful about OH, while not a Christian organization, recognizes that individuals on their own seldom lack the necessary ingredients to make it, but in the shelter of a community bathed in encouragement and love for each other, they step forward in strength. The one level five that graduated that night was affirmed by the entire community, then affirmation was followed up with a feast. I'm known at OH for being a 'pastor' or 'holy man' (whatever that means) by a large group of the occupants who don't even attend church but have heard about how the church (ABC) loves this group of OH people. This gives me total freedom to talk about my favorite subject at will, Jesus Christ. I left the Odyssey House that evening completely buzzing, in the most super-natural sense.
We serve a triune relational God that invites us into relationship through Jesus, participating in Christs eternal loving relationship with the Father. The sweetest times I can think of in my life were times of participation in a loving community, being encouraged by the communal members when times are rough. God is a God of limitless love, being made known through Jesus. In the up and down times of trying to finish the semester well, I have seen glimpses of Christ as I have encouraged and been encouraged by others. We can't make it on our own.
-Piper

And now I leave you with these two videos shot by Dr. David Williams on his iphone. The first video is where I spoof Dr. Mark MCconnel. Mark is Scottish and frequently relates song to theology. Since it's not  at the beginning of the segment it will be harder for you to follow but will give you a small taste. Robbie is impersonating American Prof and author Tim Keel while I take Marks view. My brief Scottish in this clip isn't best characterized by this video, but you get the point.....


This is half of the Bible College love song. Allow me to cite my dad Mike Piper for the line "good looks and great personality, it just isn't fair."