Click on the Link above to read the full PDN article in context and to see the video.
The final shutdown of the two hydroelectric power plants has actually left me feeling more emotional than I thought I would. Before coming to New Zealand I worked under the Bureau of Reclamation, servicing the individual generators so they could cleanly produce the most energy possible. I worked on a team of 3, consisting of myself, John and Frank under the leadership of Kevin Yancy. Watching the video of the shutdown, it still hadn't set in to me as I had personally climbed inside of a once active generator to service it. The generators had been manually shut down before (many times), but what made this one different was that it was permanent. 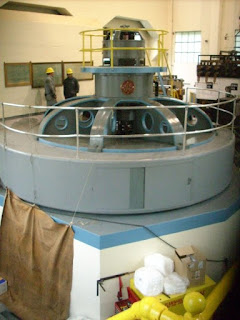 Above Photo: A General Electric Generator that had been powered down for servicing. A massive 'blanket' hanging over the front entrance to keep heat to keep the unit dry.
I want to thank Kevin  Yancy for selecting me to work on this team in the final years of dam operation, it was hands down the coolest job I have ever worked at, getting to work with equipment that dated well before the turn of the 20th century. Not only did the job allowed me to pay for the first semester of college in NZ, but I felt everyday as I was a kid again, playing in the forest, being awed by the natural setting of the dam. There was something magical about driving to work each day in the National Forest, it was stunningly beautiful. I consider myself privileged to be among the last to work at the two fantastic plants, let alone go inside of them. As a rock climber, I had been walking over/past the very dam that will be removed shortly for years. Then one day as it would seem, they gave that climber a job. My curiosity of what actually happened inside the grand building was put to rest. Goodbye old friend. 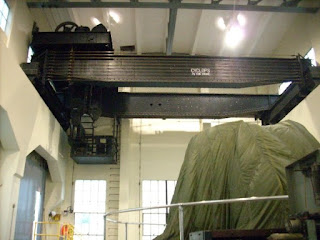 Above Photo: The 75 Ton crane "Cyclops." It was a beast that we used on few occasions to lift the heaviest things conceivable. After 100 years, the thing still worked. Amazing. The green parachute was used to help dry the Simple Green cleaning solution we used to degrease the generator. 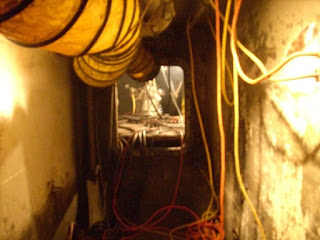 Above Photo: This Photo was taken of the actual turbine submerged in the river. Not many people have seen this. The river was turned off in a sense, as if the 'faucet' was in the closed position allowing a team of welders and myself to enter the chamber. My job was to monitor oxygen levels and relay information to the surface as we were a good distance below ground. The yellow tube relayed in fresh air from the surface. 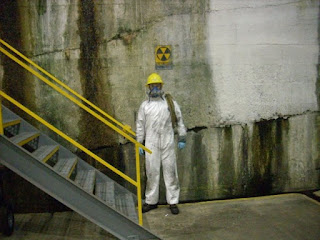 Above Photo: Myself posing under a radioactive sign. The dam was designed to withstand a nuclear blast and provide shelter to those from nuclear fallout. Rest assured there was no such nuclear waste on site, it just made for a good photo in my full generator cleaning gear. 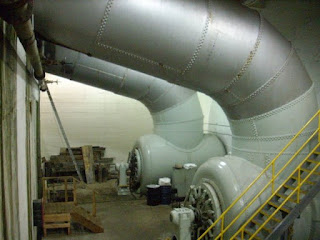 Above Photo: Inside the Lower Dam, these tubes channeled the fury of the river into the hydroelectric generators. Touching these massive pipes would send shivers down my spine knowing the force that they contained inside of them. 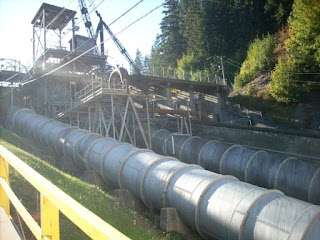 Above Photo: Lower Elwha Dam near the floodgates 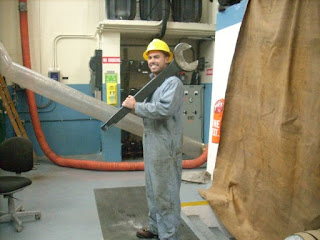 Above Photo: A hardworking member of the team carrying a 90lb wrench, Kevin I can assure you this was on a break.
Posted by Piper at 9:46 PM

This is really cool Dave

One of those all day breaks. ;)

thats cool, how did you get the job?