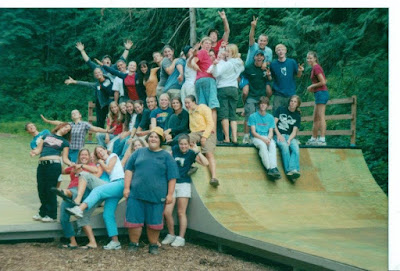 Above: Firwood 2003. This photo has nothing to do with this post, but brings so much joy to my heart at its recent unearthing by a fellow staff member that summer that I had to post it. Guess which one I am. 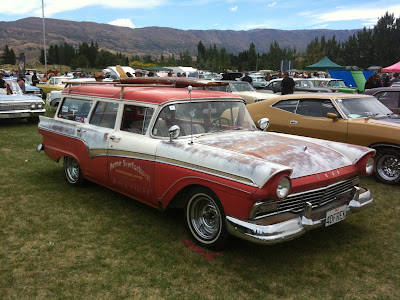 Above: One of my favorites at the show.
It's that time of the season where life explodes, as if a switch was flipped and the vines can hardly be contained. The days of work are longer and hotter as the previously soft vineyard workers bodies become hardened by the daily 85+ degree heat, 6 days a week. The boss man decided that we had been working really hard and decided to give all 18 of us the weekend off so that we could get some rest. It's funny to me how this 6 day weekend coincided with Cromwells largest Ford car show, boasting over 700 vehicles-1 of them being the bosses Mustang. 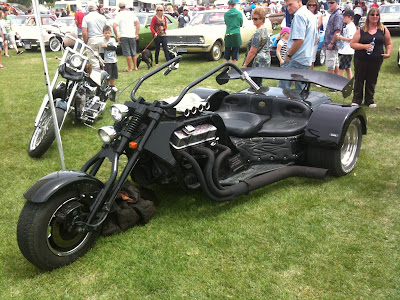 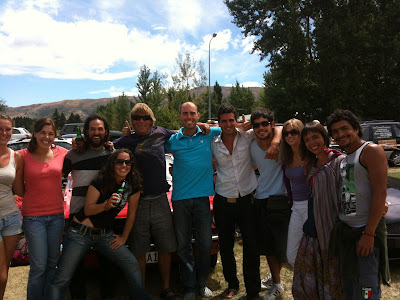 Above: Part of the Zebra Crew with the boss in shorts and glasses next to me. I think there is suppose to be a Mustang in this picture.

We now have a work crew at Zebra that represents: Mexico, United States, Canada, Israel, New Zealand, Czech, Germany, France and Chile, and they're all fantastic to work with. The people that showed they weren't interested in really working have been pruned, leaving the best. This Saturday nearly the entire crew met at the car show, viewing some classic North American muscle cars and enjoying one anothers company around Craigs stang'. Before the show Lauren and I met up with two of our favorite Jews, Omri and Adva, a precious couple that we walked around town with. After the car show the group decided that we would go out dancing in Queenstown while Lauren and I hosted the group at our house, providing some food and water. As the group was to large, we broke off from one another leaving Lauren and I with Omri and Adva. I had been praying the week to get a chance to show them Jesus through the Torah, Nev'im and the Ket'ivim (TANAKH) and then into the New Testament, but that would come later. The four of us decided to pursue my favorite mode of transportation, hitch hiking towards our Queenstown destination. I thought that the 4 of us might have difficulty getting picked up but that was proved very wrong when Dan with the van, pick us up. Lauren sat in the front (the only available seat belt) and myself and the Jews sat in the back. Dan discovered that Omri and Adva where from Israel and he lit up. Dan is a 26 year old Maori guy that just so happens to love Israel after visiting and accepting Christ into his heart a year ago. As the three of us were sitting in the back we couldn't really hear the people in the front, so conversation was divided between the front (Lauren and Dan) and the back (myself and the Israelis). This gave me a chance to share about my near death experience and where God had lead me in life, providing a foundation for future conversation. 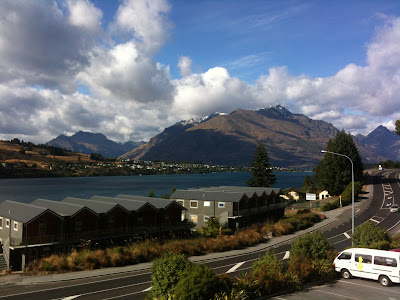 Above: The view from Dan's condo deck.
The Queenstown plan was for Lauren and the Israelis to stay in a hostel, with me hitch hiking back to Cromwell after dinner. I wanted Lauren to experience a international night like I have had so many times before that was all her own. That wasn't to be as Dan opened up his house to us to stay at for the night and offered to give me a ride back to Cromwell in the morning. Everything changed, as we walked up to his beautiful lakeside condo that was paid for by his work. Whoa. As the women made us a beautiful pasta, I was able to discuss Israels history with the Israelis in a way they had never heard before. God opened the door for conversation on, covenant, Jewish hopes pre/post exile, Abraham Isaac and Jacob... along with Jesus as defined by a Jew named Paul. They were totally enthralled and I was more than grateful for education and Laidlaw and background in Hebrew language. I was blown away by the response. This is a work in progress... pray for these two. After the history/Bible lesson they asked me to share my testimony which provided fantastic dialogue. Now for a complete change of pace.
The Flying Frenchman showed up. Gabriel, who I have affectionately named, shares almost as much enthusiasm as me for working. He is natural leader based on his personality and charm. With him he brought the rest of the Zebra international work crew in a van to Dans house. Dan was completely ok with this (invited all these strangers to stay the night at his new condo), and both Dan and I took on the roles of designated drivers for the crew. We danced/ road mechanical bulls until 3 in the morning, I haven't had so much fun since New Years with Lauren. At one point Dan and I decided to leave the dance club and talk about Jesus which was a sweet time with a amazing brother. Later that evening the club decided to promote a distasteful competition among volunteering woman, I walked out with Dan and Lauren. Shortly behind us followed the Flying Frenchmen who was confused/impressed 1. with Laurens rejection of his advances as he had never experienced that before (Lauren went for a walk on her own to pray and wasn't there for the following conversation). And 2, my love for God as he respected me/was equally angered by it. For the next 15 minutes he told me why he didn't believe in Jesus but prayed to a god that he identified as his ancestors. For not believing in God, he was certainly angry with him. I smiled while telling Gabriel we would chat about God on Monday when he was sober. 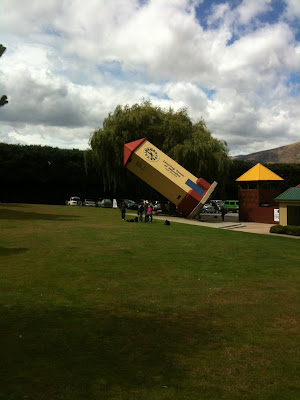 Above: Leaning tower of Wanaka. 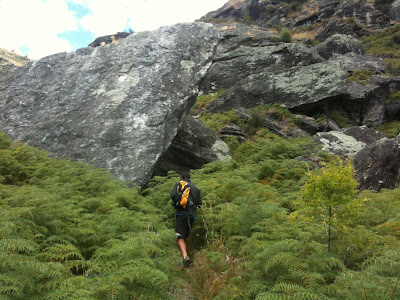 Above: Andrew scoping out a good boulder problem to work on.

Everyone got home safely that night. The next morning, Dan drove me back to Cromwell where I briefly ate and dressed for a day of rock climbing with another coworker in Wanaka. I hitch hiked to Wanaka with a lovely Kiwi family and then met up with Andrew. We drove out to the stunning rock fields in Wanaka where we climbed all afternoon. All in all, it was a amazing weekend. Some might object to Christians dancing in a club and in part I resonate with that. What happened though was a beautiful opportunity to share with those that previously thought Christians didn't know how to have fun. They saw stone cold sober Christians having just as good time as them for far less money. I think this will open multiple doors in the future for conversation. As for me, I need to go to bed. Pushing 26, I'm to old for this and need my sleep.
-His 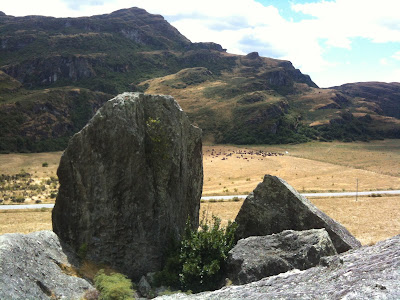 Above: Camera betrays massive scale. Those dots are Cows. 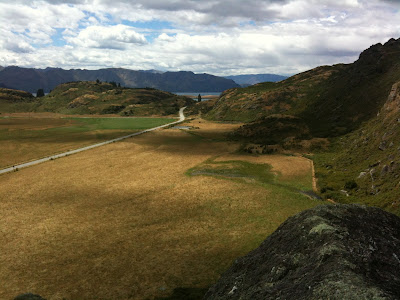 Above: Unreal Beauty on a huge scale. 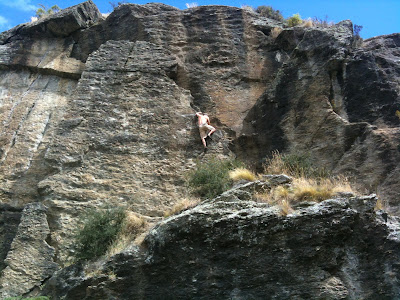 Above: Least safe thing I have done since my trip to the hospital. 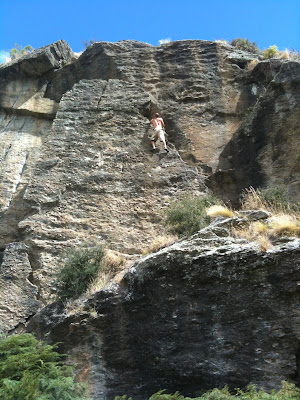 Above: Me stopping on a free-solo route before the top. Decided it was best to turn back, thanks for that one wisdom.
Posted by Piper at 12:49 AM