One down, Two to Go. 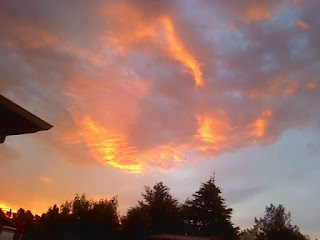 Above: Stunning Central Otago sunsets. Unbelievable reds and pinks, photo doesn't approach the justice it's due.
With joy in my heart and a smile on my face, I can say that semester one at Laidlaw is now paid off... again. Last year while attempting to pay for semester 2 at Laidlaw I came down with parvovirus that put me in the hospital, 3 days before the start of the semester. I had paid for half of the semester through some of my own funds but mostly generous donations from DCC family. The Friday night I was in the ER, I received a call from the schools principle, stating that I had received a $4,000 scholarship from Laidlaw. I was all set to attend school that Monday, except my gall bladder wasn't and I was a physical wreck. I used some of the donors money (at their approval) to fly home.

As of today though, I have finally paid off the remainder of my balance (as well as 10% of semester 2) after working this summer in Cromwell and receiving a $1000 donation from NZ out of the blue. Praise God, it's been a long time in the works. I thought this would have been paid off a long time ago, but between the surgery and month and a half battle between camplobacta and then stapholoccacus from the mission trip to Fiji, I was unable to work like I thought I would. I'm now working towards paying off semester 2, and Lord willing I will pay off 1 third to 1 half of semester 2, which has put me in the best financial situation since arrival to NZ.

As for my health, I'm as strong as ever, maybe in the best shape of my life- working 6 days a week in the beautiful Cromwell sun. Drinking plenty of water and eating at least 5+ servings of fruits and vegetables a day to fortify my immune system. I'm thankful for this life and still have more to live. Today marks the 2nd rainy day this summer where work is impossible, allowing me time to respond to emails and update the ole blog.

If you can remember back to my November 13th blog entry, I shared about a friend from China that I got to share Christ with over email. After not receiving an email back from him in 7 weeks, I began to think crazy thoughts. Maybe I had said to much about Jesus? Maybe he was in Government custody, as the Chinese government screens emails. I was frustrated at myself for maybe putting him in possible danger(?). Then... last week I received word back from him thanking me for introducing Jesus to him. I won't share further or mention his name but the next blog entry I write might prove to be a interesting read, a letter to the government. Stay tuned.