Where’s His Head At?

For the last few weeks I’ve had that 90’s commercial “this is your brain on drugs…”, on my mind. When the doc shows you a CT scan of your compressed brains expanded ventricles with 3x as much fluid in your skull as should be there, I couldn’t help thinking, “that’s my brain on a cyst.” 6 days in the neuro ICU, 3 CT scans, 2 MRI’s, 1 ECHO, EKG, and ultrasound later, I was released from Harborview into the hands of loving family. The days leading up to this week were curious.

This summer was a packed one. It flew by and a lot of great and hard things occurred. I didn’t even realize that the spiritual/emotional toll on my body had been tremendous. Even after an incredible stay in Kona with my cousins, I was still tired. Daily reading the bible and even praying proved difficult. When the student’s school year started in September, I hardly felt ready- still focusing on what I saw as personal shortcomings in ministry. Somehow, at some point, my eyes shifted from God’s Kingdom to David Piper’s. It would take some weeks (if not longer) to realize what had happened and why my passion had all but disappeared. Let’s just say I’m so thankful for a courageous wife and long time mentor that both love the Lord and myself. God had already done surgery on my heart by the time I preached on Psalm 2 at DCC on October 11th, and I was excited for the future. As my joy in the Lord was renewed, so did the passion for building His Kingdom.

In the two+ months leading up to Harborview, I began getting dizzy spells nearly every time I stood up… that or temporarily losing vision. I mean, I would get up from my office chair and say hello to you because I knew you were there in the doorway, but I was seeing double or even nothing at all. It took a while to really notice it and even longer to stop dismissing it as something life or sleep related. When I went in to get a few warts frozen (gross, sorry) I began to share that with my doctor who gave me some advice to follow regarding what he thought it was. The following Monday (10/26) when I came back in after following his instructions and still having the same symptoms, I asked for a CT scan after sharing the Christian gospel. He agreed and my slot was booked in for Friday morning.

During the time leading up to the initial scan, I truly feel like I was being prepared for its results. On Tuesday I got to share about the then confidential CT scan with an elder at DCC who prayed for me. Wednesday saw me share with a medically trained colleague about my lighthearted “plans” to quit my job and go into full time evangelism if I had something truly insidious on my brain.  On my Thursday off that week, I ran into a beloved family friend and cancer patient who I had been meaning to spend time with for months at SARC. We ended up spending the day together where I had a glimpse of what life could look like. Before Friday had even arrived, I knew that whatever its outcome, I was going to thank the sovereign creator of the earth for His plans in my life. When I got out of the multi-million dollar CT machine on Friday for the first time in Sequim, the radiologist didn’t let anything on. I went home unsure of what to check next, half-kicking myself for being such an alarmist.

When the phone rang around 4pm that day with an energized nurse telling me I needed to head either straight to the ER at Olympic Memorial Hospital or Harborview as there was a 6x6x8mm mass in my brain, it was almost a relief. The same nurse that broke the news to Lauren, told her that she didn’t understand how I was still functioning with all that pressure on my brain.

That first night was a long one. It came complete with an undesired (but required) ambulance ride from Olympic Memorial to Harborview, a ride that let me share Jesus to support crew. *Just a side note, but when you have a mass in your brain, you do no waiting in line of any kind. That was a nice bonus*. For the next few days I had visitors, watched Allblacks rugby and Seahawks football as nurses/doctors poked and prodded me. Later on Sunday the surgery was scheduled and it was then for the first time that night that I got a little emotional as I held Lauren in my hospital bed. On Monday afternoon I underwent the shunt surgery that would see a permanent pump installed into one of my ventricles with the tube leading into the ‘open space’ in my abdomen. The surgeons noted my tremendous brain pressure, but the relatively short surgery was a success. I was talking again that night and walking by morning. 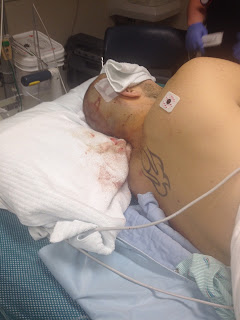 Above: Fresh out of surgery, still under anesthesia. 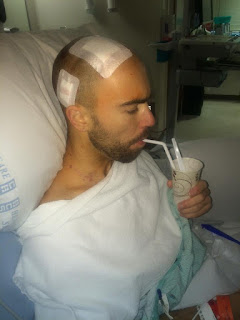 Above: A little out of it.

Tuesday morning came around and I felt fantastic. I was mentally alert and almost ‘all there’. With a plate of bacon and sausage in front of me, I felt ready to tackle anything. I knew a nurse had just given me strong painkillers so I made a welcome video for my wonderful parents/brother in law who would be in shortly, just in case I got weird. And weird I got…

I was initially doing so well my discharge orders were all but completed. I started not feeling so hot around lunchtime and by the early afternoon I collapsed walking in the hallway at the ICU next to my wife who helped assist my limp body to the ground. Waking up on the ground completely disillusioned and surrounded by doctors (a second for me in this lifetime), they proceeded to do emergency checks on my body with an additional MRI and CT scan. I thought this might have been my last day on earth as the color left my body and it felt as if my heart/body was actually shutting down. Medicated yet awake, I remember being confused. How could some of the things spoken over my life come true if this was it? Maybe I had heard wrong? I told my family I loved them and then asked God to make it quick if this was the plan. It was a dark night. 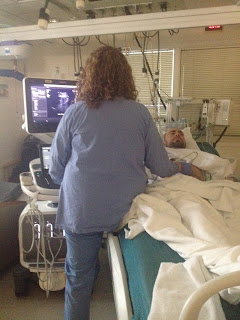 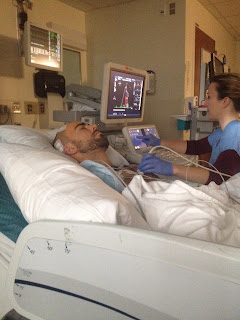 Waking Wednesday morning, my nurse told me I looked like “death warmed over,” the previous night and I saw the emotional toll the evening had taken on those who were with me. Wednesday saw more tests that proved inconclusive, but my vitals were stable and I felt stable. Sleeping in the ICU with all of its bells and whistles going off is quite the task. When I did   finally get to sleep I had a drug induced nightmare that saw me jump out of my bed like a crazy person and made a start towards the door to “get help.” Lauren was able to calm me as I realized it was just a dream. I got back into bed but didn’t sleep. On Thursday night I was discharged after I was able to walk with my walker around the halls without passing out (like a big boy). My dad drove me home in his big comfy Lincoln that night with my mom and wife. That first shower in a week before climbing into my own bed was absolutely incredible.

Today I’m able to walk around the house unaided and communicate nearly all that’s on my mind. Reading has been difficult, but listening to and discovering new music that honors Christ has been soothing. The ‘fog’ that I have been in has receded some (much like my hairline) but I’m still not out of the woods, so to speak. On Tuesday, we were close to heading back to the ER as I was having great pains near the surgical site in my abdomen after being pain free for the previous two days. Now (Friday) the pain is minor and I look forward to the day when I can get back to work. I still operate in slow motion and my balance isn’t the best, but overall I feel much better. I’ve also been the recipient of your tremendous love. The outpouring you gave was overwhelming. Thank you. 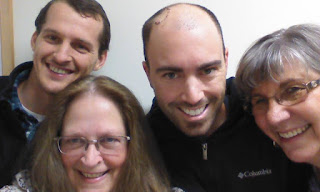 On November 24th, the surgeon in Seattle will remove the sutures and I will also meet with the world’s expert on parasites in the brain. Doctors looking at my CT/MRI scans said what’s in me could either be a cyst or a benign tumor... it’s inconclusive as of now. A possible theory is that at one point I had a parasite that left a slow growing cyst in my brain. These creatures aren’t normally found in the United States, but because of my travels, it's plausible I could have had one at some point (I've been very sick from food poisoning in Cambodia, Guatemala and Fiji). Whatever the outcome, there is still Kingdom work for me to do on earth and I look forward to returning to wider society to proclaim that God, revealed in Jesus, is LOVE- despite there being natural and moral evil(s) that occur on Earth. I firmly believe that God uses everything in the believer’s life for good, regardless if it is seen in their own lifetime.

The night before surgery, Lauren and I repeatedly watched the video below. Music has really helped the healing process.