Not the Way it's Supposed to Be

Maybe you’ve looked out your window or scrolled through your news feed when this horrendous feeling squeezes you with, “everything is wrong.” Yesterday, I saw a cardboard sign in the middle of the road pointed to a vast homeless camp with the inscription, “Turn right for stolen bikes.” This occurred at 1pm, off a major Portland road in broad daylight. 100’s of bikes and tires were strewn about. This isn’t even a unique experience. To be honest, I’m not sure if I’ve been this heartbroken or angry with all that is happening in the world than at any other point in my life. Let me back up a minute though and start where we left off together...

On August 16th, I started attending early morning prayer on Mt. Tabor with Door of Hope Church, meeting some truly fantastic people. The first guy I met was a wild prophetic type dude known throughout Portland as *Bob from QFC*. Bob and I got talking, and he found out that I had been to an underground church of 50ish people or so in China. We began talking about small groups meeting and praying as a means to revival. In North Carolina the week before, a good friend speculated that the next revival in this country will be of quality in the church, not quantity of people. That resonated with my spirit. Bob believes the American church will need to go underground in a couple years. This resonated with my spirit too. The next day at early morning prayer I met a guy named *Charlie* who ended up inviting me to an Ezekiel Bible Study that also promised a bounty of Chick-fil-A goodness. Lauren and I eagerly showed up on time. From the Bible Study we were invited to serve the homeless at the Portland Rescue Mission (if you have spare Gideon Bibles around your house, the Mission could really use them) the following night. Parking near downtown and walking across the Burnside Bridge with a group of Door of Hopers, I met a guy named *Hendrix* who like me, had had his bike stolen. He shared his story and I shared mine. He told me not to lose hope as his stolen bike had been returned by the police a month after it was taken. Little did I know in that moment that his insurance had already replaced his stolen bike and he’d end up selling me his returned bike for 10% of what it was worth. That night I got to look 100’s of homeless people in the eye and tell them Jesus created them and loved them profoundly before handing them a meal. When the evening ended, I experienced God’s love afresh with the gift of an essentially free bike; a true answer to prayer. Incredible.

Returning back to Sequim to prepare for the DCC summer celebration was beautiful and devastating. After a string of disappointments surrounding school, we found out my last remaining ‘in person’ class was canceled. “What are we even doing here in Portland paying outrageous rent for? With Zoom, we could be anywhere in the world.” Driving down a forest road later that day that had meant so much to us over our April/May sabbatical as a healing spot to pray, a ‘CLOSED FOR COVID’ barrier stood. I lost it. I’ve literally not sworn that much for just over a decade when God transformed my heart in early 2008. Fuming, I drove half an hour all the way back around to Lake Sutherland when it was only minutes away via the closed road. Getting into the lake water seething, I clearly heard “do you want to enjoy this or do you just want to be angry?” I responded, “I want to enjoy this.” Swimming a bit further, the line from the movie ‘Grand Canyon’ popped into my head; “it’s not the way it’s supposed to be.” “You’ve got that right,” I replied. I finally reached my swimming destination and I clearly heard God say, “do you trust me?” In this way, God affirmed my feelings but called me beyond them. I began crying, then asked His forgiveness. I left the lake water differently than I entered. I believe what God, in his kindness, lead me to that afternoon is true for us today.

School starts tomorrow and despite circumstances, I’m excited, knowing and feeling God is in control. There is a heaviness and weight in this city over the people we meet. We don’t really know why we’re here, but confident in what God is doing around us. In Exodus 2:23-25 God hears the cries of his people and remembers them in their suffering. What a tremendous passage reminding us that even when it’s “not the way it’s supposed to be,” God is still present and active even when we can’t feel it. 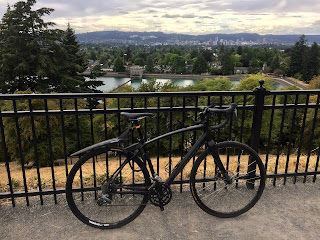 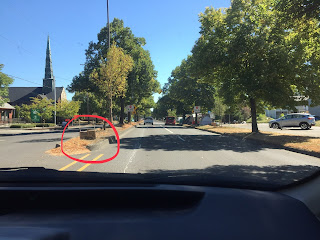 Above: One of the many bike theft camps in our area. The one closest to our apartment uses marketing 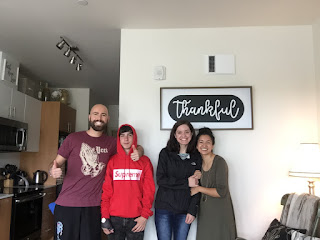 Above: A couple students spontaneously came down to Portland to say hello 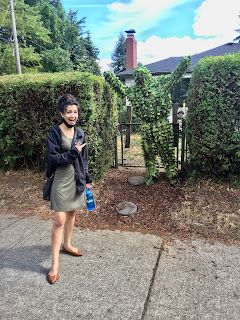 Above: After worshipping in Pastor Evan's backyard on August 22nd, we made a new friend walking back to our car 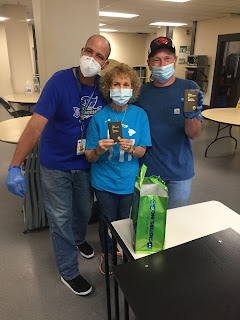 If you have spare Gideon Bible's around, Tim+Linda and Amaury would love to hand them out at the Portland Rescue Mission
Posted by Piper at 12:20 PM