When Things Burn Down 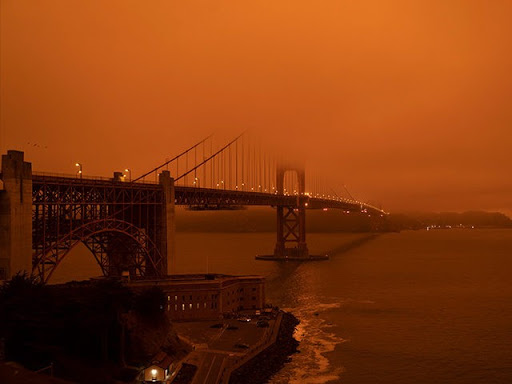 What an eventful two weeks this has been. Classes started and I was the first student in the Western library in the C-19 era when those doors opened. They hadn’t had a student in that building for nearly 7 months so I’m really not sure who was more excited, myself or the librarians. The last day (Monday 9/7) Door of Hope held it’s month long, early morning prayer meeting for revival, was the first day the smoke hit. I actually had a vivid dream the night before that someone tried to break in, and the apartment burned down, so it was on my radar strangely. All the recent poor sleep has left me exhausted. Then the wind and smoke came. Wind like I haven’t seen for years. Having thought about what possessions I’d prefer not to lose, we began packing our bags ‘just in case’ as the evacuation line crept 9 miles from our complex. I began tearing the place apart for my external hard drive to backup my precious laptop memories (essays, sermons, pictures etc.) but couldn’t find it. I went to bed that night discouraged. Tuesday (9/8) rolled around and I tried to study but another poor sleep from the windstorm brought fog to my brain as I tried to read and retain scholastic material. Another hard drive search proved fruitless. I decided to go back to bed in the middle of the day which isn’t my style at all. This is when God began to work. Upon waking up out of a groggy afternoon sleep, I accidently knocked my wife’s watch off behind our bed. With how small our room is, it was going to take some work to get to… then I had the idea to pull the mattress off and see if I could reach the small item between the wooden frame slats. What I discovered was that I could remove the slats and get to the packed contents under the bed. Instead of finding the watch at first, I found my hard drive. I know it sounds trivial, but in that moment (and even today), it was a small miracle for me. I saw God working in the struggle, leading me directly to what was missing, in my sleep almost! What a sweet reminder of his presence. On the 9th the Oregon fires started getting real bad real quick and when we left at 5pm, it looked like it was night. The sky was an ominous red-orange ashen color making the city look like the surface of mars. Breathing was a challenge and it wasn’t until nearly Olympia that we saw the stars in the in the night sky.

We celebrated a wonderful weekend with family and DCC at their first live service since March. What was supposed to be a quick weekend trip ended up being a 10 day excursion as Portland reported the most hazardous air in the world and it was clear we shouldn’t return. This combined with a lack of sleep and falling behind in studies (all but one study book was in Portland) produced some serious discouragement especially when already struggling with online learning (not my strength) and limited M/W/F library hours. Were we on the right track in the right place? Did we hear correctly? Should we be in school right now? I spent an early morning in the woods praying as we prepared to go home the next day.

We returned home 9/17 and the air cleared completely 9/19. Tremendously grateful, especially hearing from a fellow pastor how multiple families in his church lost their homes. Today we celebrated the first in person service with Door of Hope in 7 months and it was a sweet time. Next week I begin ushering and I’m thankful to be learning what I’m learning, just taking things one day at a time.