Provision Past and Present

On March 6th I discovered a strange $420 auto-renewal charge that occurred on March 3rd 2021 to my Visa card. This lead me to discover that this wasn’t the first time this auto-renewal had happened! Another $360 charge had taken place the previous year on 3/2/20. After some sleuthing, it was determined that I had been paying for something I wasn’t using at all. Quick spoiler in the story: I was completely reimbursed and all is well. While I definitely noticed the $420 missing from this year (2021), I completely missed the $360 charge last year (2020) that came around a time when everything was being canceled (namely our church youth trip to Guatemala) and I was heading towards a sabbatical at a place with no wifi and little reception. Lauren and I were living on dual incomes and it’s clear now that the money wasn’t missed in the moment because I completely missed the charge. It happened without our knowledge and didn’t impact our lives.

Fast forward to today as a student on zero incomes. I quickly reached out to the company on March 6th after discovering what had happened and they immediately sent me a check a week later to cover both years of auto-renewals. The 2021 renewal charge was very much noticed while the money coming from the 2020 renewal seemingly came back to us as a free gift out of nowhere.

On Sunday March 14th between 10:30 and 11pm in Portland, someone took a baseball bat(?) to our parked car windshield we had owned for almost a month; this was the car that replaced our totaled Prius after a person ran into me on 82nd Street in Portland. We don’t understand why someone would damage our car like this? We got the email and pictures from property management about our car while we were at a former Dungeness Community Church students wedding in Virginia. After checking windshield costs on Google from Lynchburg, we discovered that the replacement would be $350+. On Tuesday night (March 16th) when flying back from the Virginia wedding to Portland, I watched a confusing movie about time travel. In the movie people from the past and the future were working together to impact the present… at least that’s what I think happened. This got me reflecting about how God is actively inside our historic human time and outside of it, simultaneously working to achieve his goals. He had known that the year before in 2020 we wouldn’t miss that $360, but now it would definitely mean something to us… it was like balm on a discouraged heart. 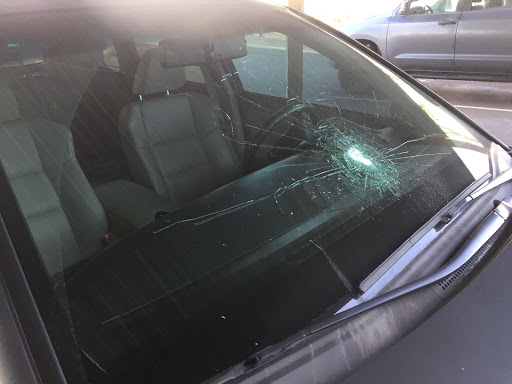 It's actually worse than it looks.
When we got home to Portland from the airport we saw for ourselves the devastated windshield, but also had a check in the mailbox to cover it. The check and smashed window converged at the same time perfectly. Again, God has blown my mind and concept of provision on his timeline. It will take me weeks to unpack what fully happened here… Lauren even said “a lifetime,” to barely understand God’s work in human events which is much more accurate. Before watching “the confusing movie” on the flight home, I was reading a commentary on Hosea/Amos/Micah; three prophets who wrote across different time periods. Hosea initially lived in a time where Israel was still prosperous… but he could see this wouldn’t be the case much longer as he looked back in time (so to speak) upon what God had required of his people through the written Torah (Genesis through Deuteronomy). His calls to the people to ditch the false gods they were worshipping and the true God at the same time, went completely unheard. As Hosea read back into the past at what God required of his people, God supernaturally revealed to him what was coming shortly to this disobedient people, in the future. I could go on and on about Hosea’s story… all of this to say, we’re living under a God who is simultaneously working from our past and future to affect the present in ways we can’t even begin to understand. Lauren and I are praying that God would use our broken windshield for good in the lives of our surrounding neighbors as we have a chance to model Christian forgiveness, fully trusting that God ALREADY HAS used this moment from the beautiful future he’s creating. I’m going to stop talking now about time and other things I don’t fully understand, but I’m just in awe of the God we serve who is LORD over time which should give us greater confidence to live our lives faithfully trusting him in the present. God has provided for us in every way today, most graciously seen in his sending of Jesus to die in our place 2,000 years ago for bad things we haven’t even done yet. A faithful man named Glenn Brown from DCC (who has since gone to be with Jesus) once said, “God takes our past and creates our future.” That is true on more levels than we can even comprehend. God does this for his glory and our immense joy. Be encouraged today friend.
Posted by Piper at 11:48 AM